The mystery of what happened to Malayian Airlines Flight 370 may be over: an aviation expert believes one of the pilots murdered his fellow pilot and the passengers before ditching deliberately in a murder-suicide.

For four years what happened to MH370 has been a mystery.  The plane took off from Kuala Lumpur at 12.41am on March 8, 2014,  but forty minutes later it vanished from radar.  It continued flying for six hours.  An international search effort tried to find any wreckage on the Indian Ocean bed but fond nothing.  But some wreckage was found off the East coast of Africa.

Larry Vance, a former investigator with the Transportation Safety Board Canada, examined detailed photos of the wreckage and believes it proves his theory that one of the pilots deliberately killed his colleague and everyone in the passenger cabin then crashed down into the ocean to commit suicide.

He claims that the flaps were down, which means the pilot was flying slowly before the crash.

Another expert, pilot and instructor Simon Hardy, believes the plane flew along  the Malaysian/Thai border, avoiding detection by air traffic control radar.  “If you were to commission me to make [a plane] disappear I would do exactly the same thing.”  And he thinks the pilot responsible was Capt. Zaharie Ahmad Shah.  The course took the plane over his home in Penang where he dipped a wing in farewell before taking the plane and its passengers over the Indian Ocean to their deaths.

The official verdict is that the plane crashed into the sea after running of fuel.  They think there is no proof to back the murder-suicide claim.  But there is nothing to explain why MH370 changed its course and crossed the ocean.

But Vance has an explanation: he thinks the pilot responsible crashed in the ocean far off-course because he did not want the plane to ever be found.

There have been a few cases of pilots deliberately crashing. EgyptAir Flight 990 in 1999, co-pilot Gamil el-Batouty crashed the plane killing 217 passengers.  And Andreas Lubitz, co-pilot of a Germanwings plane crashed into the Alps in 2015.

Still, it is very rare for this to happen.  We’ll have to wait for a comprehensive report on what actually happened. 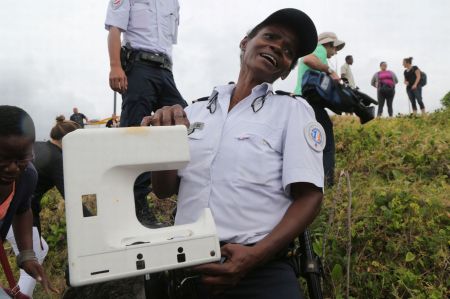 Policeman with a piece of debris of MH370 on Indian Ocean island of Reunion Picture from mirror.co.uk

Until a few months ago, Malaysia Airlines had one of Asia’s best plane safety records. But 2014 changed all that. On March 8 Flight MH370, carrying 239 people from Kuala Lumpur to Beijing, lost contact with air traffic control and has yet to be located. A massive international search is now concentrated in the Indian Ocean to the far west of Australia. And now, MH17 has crashed, apparently shot down by a surface-to-air missile, allegedly fired by a pro-Russian separatist in Ukraine.

A lot of the passengers were HIV/AIDS researchers, on their way to an international Aids conference in Melbourne, Australia. No names have been confirmed but it is believed leading HIV/Aids researchers are among the dead. Malaysia Airlines is still contacting the next of kin of the deceased passengers but said in statement it would release the passenger manifest when it had finished.

It is looking more and more like pro-Ukrainian were responsible, though they are denying it. The former US secretary of state Hillary Clinton however went further and said there were indications Russian-backed militia were to blame. TheAustralian prime minister, Tony Abbott, said it appeared the plane was shot down by Russian-backed rebels.

The Russian president, Vladimir Putin, said Ukraine bore responsibility for the crash, according to a Kremlin statement issued early on Friday, but he did not accuse Ukraine of shooting the plane down. “This tragedy would not have happened if there were peace on this land, if the military actions had not been renewed in south-east Ukraine. And, certainly, the state over whose territory this occurred bears responsibility for this awful tragedy.” By that, does Putin suggest that the UK was responsible for the destruction of Pan Am Flight 103 because it was destroyed over Scotland?

Whether the pro-Russian separatists destroyed the plane or not, there are certainly signs that they are controlling access to the wreckage. Why are they doing that? What are they trying to hide? It was initially believed the separatists had taken away the plane’s black box flight recorder, but Ukrainian emergency workers have found the plane’s black box flight recorder, AFP has reported.

The separatists are thought by many to have shot down the plane. Th3e Guardian has published this:

Audio was being circulated on social media, apparently released by Ukrainian security services, purporting to be an intercepted conversation of pro-Russia rebels confirming they had shot down a civilian jet.

The conversation is apparently between a group leader and his superior and suggests that they initially thought they had brought down a military aircraft but later realised their error.

The group leader, “Demon”, tells his boss: “A plane has just been shot down. [It was] ‘Miner’s’ group. It crashed outside Enakievo. Our men went to search for and photograph it. It’s smouldering.”

After his men apparently inspected the crash site, Demon reports back. “Cossacks from the Chernunkhino checkpoint shot down the plane. The plane disintegrated in mid-air … they found the first body. It’s a civilian.”

He carries on: “I mean. It’s definitely a civilian aircraft.”

If it was separatists who did this, they have very likely shot themselves in the foot (if not the head). How many allies will they have now?

In the meantime, if you’re planning an international trp, remember the old adage: “Bad things happen in threes”….