If this gets me a death threat, I’m gonna be real pissed off…

So, the Charlie Hebdo murders have brought freedom of expression to the forefront. So, how far does the freedom of speech spread? Can we make jokes about the Paris killings? Can we take the mick out of the cartoonists who were stupid enough to get themselves killed by publishing cartoons of Mohammad, when they’d already been threatened with death for publishing cartoons of Mohammad?

One rule for them, one for us? Hope not. But it’s starting to look that way.

Also, think on this: first of all, the “I am Charlie” thing was meant to tell the terrorists that they could not force the “democratic world” to give up its values and freedoms. But now, David Cameron says he’ll push through his beloved snooper’s charter if the Tories win the 2015 election in the UK. The rest of the fucks are also making such sounds. Screw “I am Charlie”… it’s gonna end up as “I’m a right Charlie” when our beloved democratic leaders take away the rights we have that make us different to the bastards who are killing in our streets. We’re all fucked, at the hands of our wonderful democratic leaders. The wonderful union of last week is falling apart already.

Oh yeah, one more thing: Hayat Boumedienne, the partner of X, was named by the French police as X’s accomplice in the kosher supermarket siege; but now we know she wasn’t even in France when the violence there kicked off. French forces will no doubt kill her if they get a chance (“resisting arrest” bullshit…). Just more of their demonisation of the other, same as the widened search for possible accomplices… rounding up anyone the killers knew. One day it’s “On est Charlie”, the next it’s “kill the Moslems!” Yeah, Western Europe is a real centre of tolerence. Fucking bastard Euro pigs… 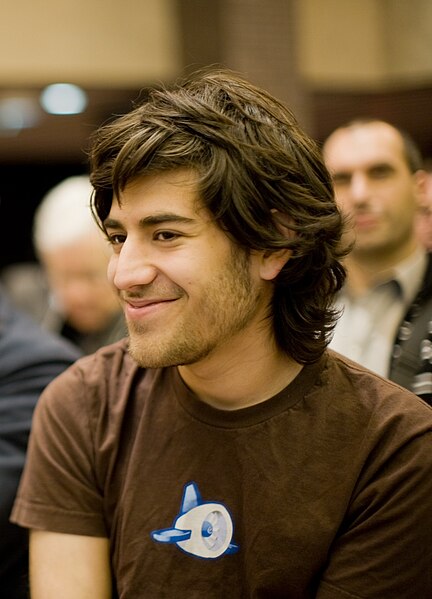 Aaron Swartz before they killed him… Look, he’s smiling

Don’t you know who Aaron Swartz was? Shame on you! Go read about this modern-age hero now!! Aaron Swartz believed in free access to publibly-funded science and other documents. He helped fight SOPA. And now he’s dead.

He wrote “The Guerilla Open Access Manifesto” which clearly outlines why it’s wrong to commodify knowledge. Rather than give you a link, I decided to reprint the Manifesto here.

Information is power. But like all power, there are those who want to keep it for
themselves. The world’s entire scientific and cultural heritage, published over centuries
in books and journals, is increasingly being digitized and locked up by a handful of
private corporations. Want to read the papers featuring the most famous results of the
sciences? You’ll need to send enormous amounts to publishers like Reed Elsevier.

There are those struggling to change this. The Open Access Movement has fought
valiantly to ensure that scientists do not sign their copyrights away but instead ensure
their work is published on the Internet, under terms that allow anyone to access it. But
even under the best scenarios, their work will only apply to things published in the future.
Everything up until now will have been lost.

That is too high a price to pay. Forcing academics to pay money to read the work of their
colleagues? Scanning entire libraries but only allowing the folks at Google to read them?
Providing scientific articles to those at elite universities in the First World, but not to
children in the Global South? It’s outrageous and unacceptable.

“I agree,” many say, “but what can we do? The companies hold the copyrights, they
make enormous amounts of money by charging for access, and it’s perfectly legal —
there’s nothing we can do to stop them.” But there is something we can, something that’s
already being done: we can fight back.

Those with access to these resources — students, librarians, scientists — you have been
given a privilege. You get to feed at this banquet of knowledge while the rest of the world
is locked out. But you need not — indeed, morally, you cannot — keep this privilege for
yourselves. You have a duty to share it with the world. And you have: trading passwords
with colleagues, filling download requests for friends.

Meanwhile, those who have been locked out are not standing idly by. You have been
sneaking through holes and climbing over fences, liberating the information locked up by
the publishers and sharing them with your friends.

But all of this action goes on in the dark, hidden underground. It’s called stealing or
piracy, as if sharing a wealth of knowledge were the moral equivalent of plundering a
ship and murdering its crew. But sharing isn’t immoral — it’s a moral imperative. Only
those blinded by greed would refuse to let a friend make a copy.

Large corporations, of course, are blinded by greed. The laws under which they operate
require it — their shareholders would revolt at anything less. And the politicians they
have bought off back them, passing laws giving them the exclusive power to decide who
can make copies.

There is no justice in following unjust laws. It’s time to come into the light and, in the
grand tradition of civil disobedience, declare our opposition to this private theft of public
culture.

We need to take information, wherever it is stored, make our copies and share them with
the world. We need to take stuff that’s out of copyright and add it to the archive. We need
to buy secret databases and put them on the Web. We need to download scientific
journals and upload them to file sharing networks. We need to fight for Guerilla Open
Access.

With enough of us, around the world, we’ll not just send a strong message opposing the
privatization of knowledge — we’ll make it a thing of the past. Will you join us?

The name Aaron Swartz should never be forgotten. Neither should the date 11 January 2013, the day he died. We should remember Aaron Swartz every day, by following his manifesto. Copy and distribute documents and other material as part of a global struggle against those who would keep us down and teach us our “station in life”.

Check out the IFJ’s Survival Guide for Journalists.

After my recent post on “How to survive a riot”, I have discovered the International Federation of Journalists’ Survival Guide for Journalists.

The IFJ guide is not riot-specific – it covers a variety of dicey situations, such as “war zones and conflict areas”, “riots and civil disorder” and “abductions, hostage taking and targeting journalists”. It also has chapters on emergency first aid and post-traumatic stress disorder”.

I haven’t read the Guide yet – Goddess, I only just found the thing! – but its blurb makes it sound pretty useful, lots of advice in one handy volume. And what’s even cooler, you can download it for free in pdf format from here

So check it out. Who knows – maybe one day it’ll save your life.

Microsoft request takedown of Cryptome.org… then change their minds out of the goodness of their black hearts…

Well, Cryptome.org, one of my favourite repositories of “documents for publication that are prohibited by governments worldwide, in particular material on freedom of expression, privacy, cryptology, dual-use technologies, national security, intelligence, and secret governance”, has had an eventful day. They put online a copy of Microsoft’s “Global Criminal Compliance Handbook – US Domestic Version”, an interesting little booklet that describes exactly what info they collect about their customers for law enforcement; this annoyed Microsoft enough for them to get onto Network Solutions, Cryptome.org’s ISP, and have the site knocked off the web!

Somewhat predictably, this quickly became big news on the interwebs. But it doesn’t look like Microsoft predicted that outcome! Someone there must have realised, somewhat belatedly, that it doesn’t look too good to be a nasty bully silencing the voice of freedom. So a Microsoft lawyer got back to Network Solutions and asked for Cryptome.org to be reinstated! Here’s the email Microsoft sent to Network Solutions:

I am outside counsel to Microsoft Corporation. I am writing to confirm my telephone message left with your nighttime operator at 7:45 PST this evening to withdraw Microsoft’s takedown request with respect to the file available at http://cryptome.org/isp-spy/microsoft-spy.zip which is the subject of the correspondence below.

Accordingly, on behalf of Microsoft, I am hereby withdrawing the takedown request and asking that Network Solutions restore internet access to http: cryptome.org as soon as possible.

So Cryptome.org is back up, even though the Microsoft compliance handbook is still available from there! All that ill-judged takedown request succeeded in doing is getting a shit-load more publicity for the handbook. Publicity that I’m doing my little bit for by posting this. I urge all interested parties to go to the site now and get yourselves a copy of it. There are also copies of compliance handbooks for many other organizations such as Yahoo, Facebook, Myspace, Comcast… and many more. Why not get yourself the full set?

I find it strange that a company as adept at public image as Microsoft can shoot itself in the foot in public so foolishly. Dicks.