Very interesting conversation podcast about mesh networking, the obstacles and the ways to circumvent them. Mentions the Open Garden project, a mesh networking utility for Android smartphones and for Windows and Mac laptops (support for iOS is coming). It’s a free app that turns your device into a mobile hot spot. No matter how you’re connected to the Net (Wi-Fi or cellular), it makes that connection shareable (over Bluetooth) to other Open Garden users. Likewise, if you’re running the product but don’t have a connection to the Net, and you’re near a user who does, this service seamlessly gets you online. The conversation describes the military’s application of mesh networking. I think we need the decentralization of connectivity that mesh networking offers. As during the “Arab spring”, governments can shut down the internet in its territory. Mesh networking will get round that. The sophistication of smartphones and other gadgets and the RF power available to consumers nowadays means that a decentralized network that can route around censorship will soon be a reality.

Compared to more centralized network architectures, the only way to shut down a mesh network is to shut down every single node in the network. Image from http://www.interference.cc

Mentions Open Garden, Tropos, plus technology such as utilities meters being part of a wireless mesh network so the meter reader doesn’t actually need physical access to read the meter.

The internet is a fun and useful tool. But the infrastructure that makes the network possible is mostly owned by the big telecoms companies. At the end of the day, those companies can censor information, slow down traffic thgat they don’t like (notably peer-to-peer file-sharing) and it generally ass-hattery.

So what’s the best solution to this overly-centralized, over-business-oriented situation? MESH NETWORKING!

Instead of relying on third-party phone lines and the censorship/traffic shaping that can occur normally, mesh networking operates seeing every “node” (networked computer) via wi-fi technology. Next to no reason to use the multi-national corporations that try to brain-wash us. The nodes (computers) need to have wifi, and of course nodes have to be within spitting distance from each other. It seems a little weak now, relying on peers to keep the net working. But peer-to-peer does work, just ask anyone who’s involved in torrents. And the “infrastructure owners” can go screw themselves – cos we don’t need ’em!

I’m going to write a basic guide to mesh networking (not too in depth I’m afraid, I’m not geeky enough to get my head round it). But here we go anyway… 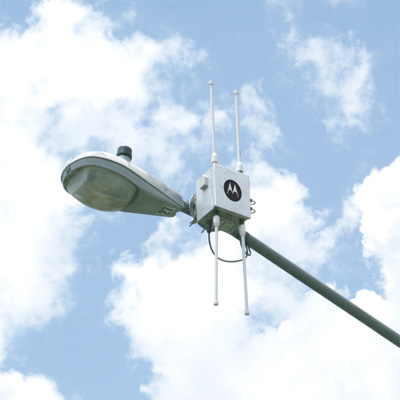 You can see from the image above that we don’t all need to use our pcs as nodes. Motorola is developing a node that can be attached to a street light, resulting in internet connectivity even when you’re out and about… and I hope to the heavens that it is free (or at least very very cheap.

The biggest advantage of wireless mesh networks — as opposed to wired or fixed wireless networks — is that they are truly wireless. Most traditional “wireless” access points still need to be wired to the Internet to broadcast their signal. For large wireless networks, Ethernet cables need to be buried in ceilings and walls and throughout public areas.
In a wireless mesh network, only one node needs to be physically wired to a network connection like a DSL Internet modem. That one wired node then shares its Internet connection wirelessly with all other nodes in its vicinity. Those nodes then share the connection wirelessly with the nodes closest to them. The more nodes, the further the connection spreads, creating a wireless “cloud of connectivity” that can serve a small office or a city of millions.
Wireless mesh networks advantages include:
Using fewer wires means it costs less to set up a network, particularly for large areas of coverage.
The more nodes you install, the bigger and faster your wireless network becomes.
They rely on the same WiFi standards (802.11a, b and g) already in place for most wireless networks.
They are convenient where Ethernet wall connections are lacking — for instance, in outdoor concert venues, warehouses or transportation settings.
They are useful for Non-Line-of-Sight (NLoS) network configurations where wireless signals are intermittently blocked. For example, in an amusement park a Ferris wheel occasionally blocks the signal from a wireless access point. If there are dozens or hundreds of other nodes around, the mesh network will adjust to find a clear signal.
Mesh networks are “self configuring;” the network automatically incorporates a new node into the existing structure without needing any adjustments by a network administrator.
Mesh networks are “self healing,” since the network automatically finds the fastest and most reliable paths to send data, even if nodes are blocked or lose their signal.
Wireless mesh configurations allow local networks to run faster, because local packets don’t have to travel back to a central server.
Wireless mesh nodes are easy to install and uninstall, making the network extremely adaptable and expandable as more or less coverage is needed.

Cheaper, wider-reaching, automatic adjustment to find the best clearest signal, faster, easy to install and uninstall, making networking very flexible. Also, less chance of being spied on by NSA/GCHQ, who have made it very clear they can, and do, spy on just about every electronic net link made. If we’re not in the NSA/GCHQ loop, how can they surveil us? Well, they can still spy on us. But it is more difficult, especially if those security-minded bods around us employ encryption too.

COMING SOON: A more indepth look at mesh networking. This blog post is just an appetizer, or palate cleanser. Look out for the techy stuff, soon to come, which will hopefully answer any questions you may have. Watch this space!!!